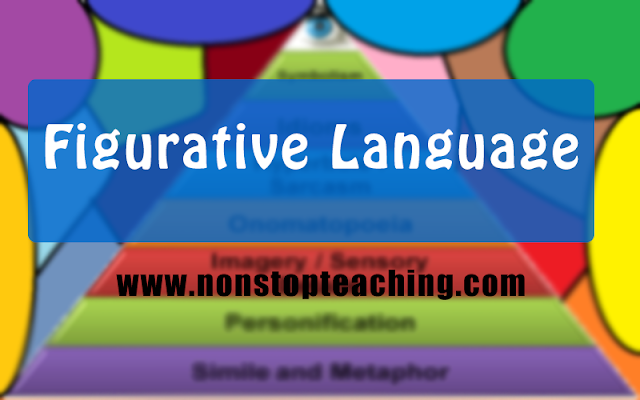 "Figurative Language is a language that uses words or expressions with a meaning that is different from the literal interpretation. When a writer uses literal language, he or she is simply stating the facts as they are. Figurative language, in comparison, uses exaggerations or alterations to make a particular linguistic point." - Your Dictionary

1. Simile - An indirect association and comparison between two things.
Example: She is like a flower.


2. Metaphor - A direct comparison.
Example: You are the sunshine of my life.

3. Personification - Giving human attributes to an inanimate object (animal, idea, etc)
Example: The sun is looking down on me.

5. Metonymy - An association wherein the name of something is substituted by something that represents it.
Example: Toothpaste is sometimes called Colgate.

6. Irony - The contrast between what was expected and what actually happened.
Example: No smoking sign during a cigarette break.

7. Hyperbole - An exaggeration
Example: Cry me a river.

8. Synecdoche - An association of some important part with the whole it represents.
Example: The face who launched a thousand ships.

10. Asyndeton - Not putting any connectors (conjunctions or prepositions).
Example: No retreat. no surrender.

11. Apostrophe - A direct address to an abstract things or a person who passed away.
Example: Love, please come and take me!