Parts of the Cell and their Functions 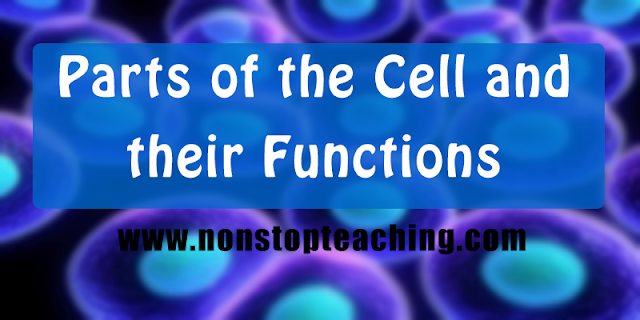 In a simplest definition, cell is the building blocks of life. It is the smallest unit of life that can replicate independently.

What are the different parts of the cell?

1. Cell wall - It is the outermost rigid covering of the plant cell. It is a salient feature of plant cell.
2. Cell membrane or the plasma membrane - It is the outer lining of the cell inside the cell wall.
3. Cytosol or cytoplasm - It is the gel-like matrix inside the cell membrane which constitutes all other cell organelles.
4. Nucleus - It is the control center of the cell. It is a membrane bound structure which contains the hereditary material of the cell - the DNA
5. Chloroplast - It is a plastic with green pigment chlorophyll. It traps light energy and converts it to chemical energy by the process of photosynthesis.
6. Mitochondria - It is the power house of the cell that carries out cellular respiration and provides energy to the cells.
7. Vacuoles - are the temporary storage center of the cell.
8. Golgi body - It is the unit where proteins are sorted and packed.
9. Ribosomes - are structures that assemble proteins.
10. Endoplasmic reticulum - are membrane covered organelles that transport materials.

1. Cell membrane - It is a semi-permeable barrier, allowing only a few molecules to move across it. Electron microscopic studies of cell membrane shows the lipid bi-layer model of the plasma membrane, it also known as the fluid mosaic model. The cell membrane is made up of phospholipids which has polar(hydrophillic) heads and non-polar (hydrophobic) tails.
2. Cytoplasm - The fluid matrix that fills the cell is the cytoplasm. The cellular organelles are suspended in this matrix of the cytoplasm. This matrix maintains the pressure of the cell, ensures the cell doesn't shrink or burst.
3. Nucleus - It is the house for most of the cells genetic material- the DNA and RNA. The nucleus is surrounded by a porous membrane known as the nuclear membrane. The RNA moves in/out of the nucleus through these pores. Proteins needed by the nucleus enter through the nuclear pores. The RNA helps in protein synthesis through transcription process. The nucleus controls the activity of the cell and is known as the control center. The nucleolus is the dark spot in the nucleus, and it is the location for ribosomes formation.
4. Ribosomes - It is the site for protein synthesis where the translation of the RNA takes place. As protein synthesis is very important to the cell, ribosomes are found in large number in all cells. Ribosomes are found freely suspended in the cytoplasm and also are attached to the endoplasmic reticulum.
5. Endoplasmic reticulum - It is the transport system of the cell. It transports molecules that need certain changes and also molecules to their destination. ER is of two types, rough and smooth. ER bound to the ribosomes appear rough and is the rough endoplasmic reticulum; while the smooth ER do not have the ribosomes.
6. Lysosomes - It is the digestive system of the cell. They have digestive enzymes helps in breakdown the waste moelcules and also help in detoxification of the cell. If the lysosomes were not membrane bound the cell could not have used the destructive enzymes.
7. Centrosomes - It is located near the nucleus of the cell and is known as the 'microtubule organizing center' of the cell. Microtubules are made in the centrosome. During mitosis the centrosome aids in dividing of the cell and moving of the chromosome to the opposite sides of the cell.
8. Vacuoles - They are bound by single membrane and small organelles. In many organisms vacuoles are storage organelles.Vesicles are smaller vacuoles which function for transport in/out of the cell.
9. Golgi bodies - are the packaging center of the cell. The Golgi bodies modify the molecules from the rough ER by dividing them into smaller units with membrane known as vesicles. They are flattened stacks of membrane-bound sacs.
10. Mitochondria - is the main energy source of the cell. They are called the power house of the cell because energy(ATP) is created here. Mitochondria consists of inner and outer membrane. It is spherical or rod shaped organelle. It is an organelle which is independent as it has its own hereditary material.
11. Peroxisomes - are single membrane bound organelle that contain oxidative enzymes that are digestive in function. They help in digesting long chains of fatty acids and amino acids and help in synthesis of cholesterol.
12. Cytoskeleton - It is the network of microtubules and microfilament fibres. They give structural support and maintain the shape of the cell.
13. Cilia and Flagella - Cilia and flagella are structurally identical structures. They are different based on the function they perform and their length. Cilia are short and are in large number per cell while flagella are longer and are fewer in number. They are organelles of movement. The flagellar motion is undulating and wave-like whereas the ciliary movement is power stroke and recovery stroke.