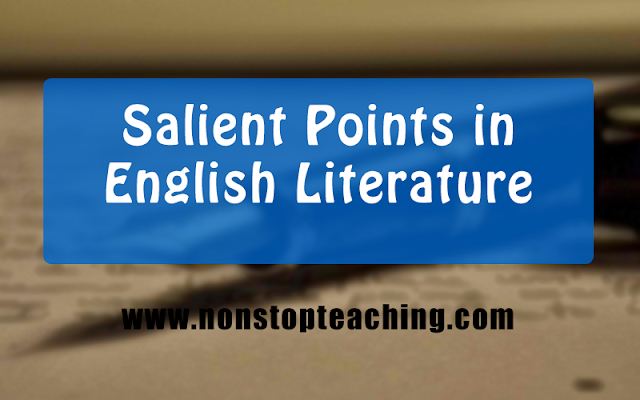 Here are the salient point in English Literature:
1. Chaucer lived during the reigns of Edward III, Richard II and Henry IV
2. Chaucer’s Canterbury Tales was written in 1385 onwards
3. Chaucer’s Canterbury Tales belongs to 3rd Period of Chaucer’s literary career
4. Norman Conquest took place in 1066 (11th Century)
5. Wyclif’s Bible was published in 1380
6. William Langland’s The Vision of William concerning Piers the Plowman was written in 1362-90
7. The Travels of Sir John Maundeville was published in 1400
8. The Hundred Years’ War was begun in 1338 (14th Century)
9. The Hundred Years’ War was fought between England and France
10. Wat Tyler’s Rebellion took place in 1381
11. The War of Roses was fought between The House of York and the House of Lancaster
12. The War of Roses was fought during the period 1455-86
13. Thomas Malory’s Morte De Arthur was written in 1470 (published in 1485)
14. Caxton’s Printing Press was set up in 1485
15. Thomas More’s Utopia was published in 1516 (Latin), 1551 (English)
16. The First English Comedy, Roister Doister was written in 1550
17. Roister Doister was written by Nicholas Udall
18. The First English Tragedy, Gorboduc was written in 1561
19. Gorboduc was written by Thomas Sackville, Lord of Buckhurst & Thomas Norton
20. Tottel’s Miscellancy was published in 1557
21. Queen Elizabeth ascended the throne of England in 1558
22. Globe Theatre was built in 1599
23. The Elizabethan Age covers the period 1558-1602
24. The leader of University Wits was Christopher Marlowe
25. Marlowe’s first tragedy was Tamburlaine the Great (1587)
26. Shakespeare wrote 37 plays
27. Dryden’s All for Love is based on Shakespeare’s Antony and Cleopatra
28. Shakespeare’s Sonnets were published in 1609
29. The hero of Spenser’s Faerie Queene is King Arthur
30. Spenser’s Faerie Queene is dedicated to Queen Elizabeth
31. Spenser dedicated his Shephearde’s Calendar to Philip Sydney
32. John Lyly’s Euphues, the Anatomy of Wit was published in 1579 and was contemporary with Shepheardes Calender.
33. White Devil and Duchess of Malfi were written by John Webester
34. Ben Jonson’s first play Every Man in his Humour was published in 1598
35. Ben Jonson is known for his Comedy of Humours
36. Ben Jonson’s play written wholly in prose Bartholomew Fair
37. Bacon’s essays are written in Aphoristic style
38. Bacon wrote essays in all 106 essays (1st, 2nd, 3rd Edition 10, 38, 58 essays)
39. Authorised version of the Bible 1611
40. The leader of Metaphysical School of Poets was Henery Vaughan
41. The term ‘Augustan’ was first applied to school of Poets by Dr. Johnson
42. The intellectual father of French Revolution Rousseau
43. Lyrical Ballads was published in 1798
44. The leader of the Pre-Raphaelite in England was D.G. Rossetti
45. The founder of the Pre-Raphaelite Brotherhood in England William Holman Hunt
46. The originator of the Oxford Movement was John Keble
47. The phrase ‘Stream of Consciousness’ is associated with James Joyce
48. The Hero of Homer’s Iliad is Achilles
49. Pope’s Rape of the Lock contains Five Cantos
50. A Ballad stanza generally contains Four lines
51. The greatest Epic in English is written by Milton
52. The next in command after Satan in Paradise Lost is Beelzebub
53. The meaning of L’Allegro is A cheerful man
54. A Pastoral Elegy written by Shelley on the death of Keats Adonais
55. Everyman a famous play of 15th Century was a Morality Play
56. The villain in Duchess of Malfi is Bosola
57. Dryden’s plays in general are called Heroic Plays
58. The last play written by Shakespeare is The Tempest
59. Andrea Del Sarto in Browning’s Dramatic Monologue was A renowned Painter
60. Rabbi Ben Ezra was a real Jewish Scholar