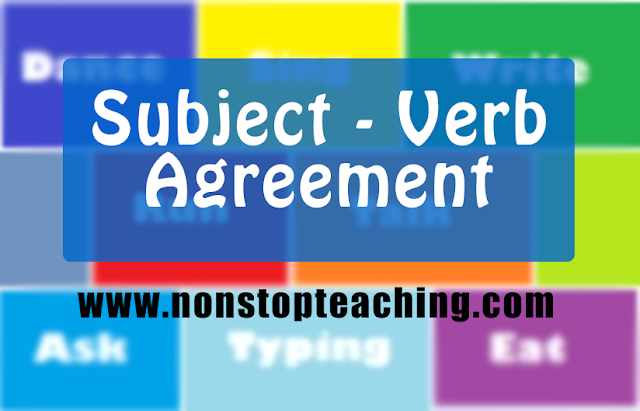 Correct your grammar! Here are the 20 rules in subject verb agreement with examples.

1. Subjects and verbs must agree in number. This is the cornerstone rule that forms the background of the concept.

2. Don’t get confused by the words that come between the subject and verb; they do not affect agreement.

· The cat, who is chewing on my jeans , is usually very good.
· The plants, which grows in our backyard , are very nice to the see.
· The boy, who pushes the carts is my friend.
· The ants in the ant-hill are working.
· The knight under the trees is the guard.

3. Prepositional phrases between the subject and verb usually do not affect agreement.

· The colors of the bag are beautiful.
· One of the schools in Pampanga is implementing a new curriculum.
· Bones of the cow are nutritious.
· The computers found in the library are new.
· Schools in this town are very nice.

4. When sentences start with “there” or “here” the subject will always be placed after the verb, so care needs to be taken to identify it correctly.

· There is a problem with the internet connection.
· Here are the files you requested.
· There are some computers left in the library.
· Here is your ball pen.
· There is an error with the codes.

5. Subjects don't always come before verbs in questions. Make sure you accurately identify the subject before deciding on the proper verb form to use.

· Does Doggy usually eat fish ?
· Where are the pieces of this collection?
· Is there something wrong with Lina?
· Who is the president in this institution?
· Where are the songs in this album?

6. If two subjects are joined by and , they typically require a plural verb form.

· The singer and the actress are from different country.
· My father and I will go to market today.
· The lawyer and the judge will go to the court later.
· The teachers and the principal will have a meeting.
· The police and the detective will have the case.

7. The verb is singular if the two subjects separated by and refer to the same person or thing.

· Red beans and rice is my favorite dish.
· Ham and bread has been my favorite snack.
· Spoon and fork is used in eating.
· Shoes and socks is the gift that I received.
· Pen and Note is my tool in school.

8. If one of the words each, every, or no comes before the subject, the verb is singular.

9. If the subjects are both singular and are connected by the words or, nor, neither/nor, either/or , and not only/but also the verb is singular.

· Erick or Christian is to blame for the accident.
· Neither Lina nor Cathy was absent yesterday.
· Either apple or grape is sweet.
· Neither Marco nor Vincent is good in class.
· Either Jessy or Daisy is good in singing.

11. The singular verb form is usually used for units of measurement or time.

· Four quarts of oil was required to get the car running.
· One half of the members of the cabinet believes that president is responsible for the incident.
· Two third of the spectators of the concert shouts when the show started.
· Eight o’clock is the start of the class.
· One fourth of the class is absent.

12. If the subjects are both plural and are connected by the words or, nor, neither/nor, either/or , and not only/but also , the verb is plural.

· Dogs and cats are both available at the pet shop.
· The president and the former PNP chief are both responsible for the misencounter.
· Apples and grapes are both sweet.
· Teachers and students are part of the teaching – learning process.
· Scientists and inventors are great people.

13. If one subject is singular and one plural and the words are connected by the words or, nor, neither/nor, either/or , and not only/but also , you use the verb form of the subject that is nearest the verb.

· Everybody wants to be loved.
· Nobody has passed for the examination.
· Someone is waiting outside the hall.
· Anybody is the player of the game.
· Somebody starts the drill.

15. Except for the pronouns (few, many, several, both, all, some) that always take the plural form.

· Few were left in the school after the parade.
· Many people were stranded during the typhoon.
· Some are gathering their data about the experiment.
· Both police and criminal were found dead.
· All are good in the game.

16. If two infinitives are separated by and they take the plural form of the verb.

17. When gerunds are used as the subject of a sentence, they take the singular verb form of the verb; but, when they are linked by and, they take the plural form.

· Standing in the tower was a bad idea.
· Swimming in the river and playing guitar are my hobbies.
· Singing is my hobby.
· Dancing and singing are quite difficult.
· Playing basketball is very tiring.

· The faculty is going to participate in the program.
· The crowd is very thick.
· The senate decides to make the judgement.
· The class is the participant of the meeting.
· The yellow team is the winner.

19. Titles of books, movies, novels, etc. are treated as singular and take a singular verb.

· The Tomorrow land is a movie starring George Clooney.
· Back to the future is my favorite movie.
· El Filibusterismo is the novel of Dr. Jose Rizal
· Noli Me Tangere is a great novel.
· Assessment of Learning Outcomes is our reference book in this subject.