What is Norm, Folkways, Mores, Taboos, and Laws 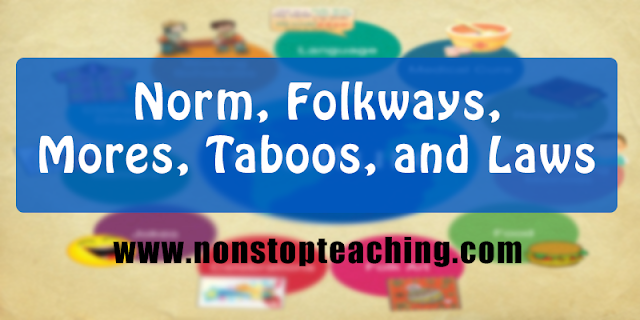 The social norm, or simply, "norm," is arguably the most important concept in sociology. Sociologists believe that norms govern our lives by giving us implicit and explicit guidance on what to think and believe, how to behave, and how to interact with others. We learn norms in a variety of settings and from various actors, including our families, from teachers and peers in school, through the media, and simply by interacting with others as we go about our daily business.


There are four key types of norms, with differing levels of scope and reach, significance and importance, and methods of enforcement and sanctioning of violations. These are, in order of significance, folkways, mores, taboos, and laws.

Early American sociologist William Graham Sumner was the first to write about these distinctions. (See Folkways: A Study of the Sociological Importance of Usages, Manners, Customs, Mores, and Morals (1906).) Sumner offered the framework for how sociologists understand this term today, that folkways are norms that stem from and organize casual interaction, and that emerge out of repetition and routines. We engage in them to satisfy our daily needs, and they are most often unconscious in operation, though quite useful to the ordered functioning of society.
For example, the practice of waiting in (or on) line in many societies is an example of a folkway.
This practice creates order in the process of buying things or receiving services, which smooths and expedites the tasks of our daily lives. Other examples include the concept of appropriate dress dependent on setting, raising one's hand to take a turn speaking in a group, or the practice of "civil inattention"—when we politely ignore others around us in public settings.

Folkways mark the distinction between rude and polite behavior, so they exert a form of social pressure on us to act and interact in certain ways, but they do not have moral significance, and there are rarely serious consequences or sanctions for violating one.

Mores are more strict in folkways, as they determine what is considered moral and ethical behavior; they structure the difference between right and wrong. People feel strongly about mores, and violating them typically results in disapproval or ostracizing. As such, mores exact a greater coercive force in shaping our values, beliefs, behavior, and interactions than do folkways.
Religious doctrines are an example of mores that govern social behavior. For example, many religions have prohibitions on cohabitating with a romantic partner before marriage. So, if a young adult from a strict religious family moves in with her boyfriend, her family, friends, and congregation are likely to view her behavior as immoral. They might sanction her behavior by scolding her, threatening punishment in the afterlife, or by shunning her from their homes and the church. These actions are meant to indicate that her behavior is immoral and unacceptable, and are designed to make her change her behavior to align with the violated more.
The belief that forms of discrimination and oppression, like racism and sexism, are unethical is another example of an important more in many societies today.

A taboo is a very strong negative norm; it is a strict prohibition of behavior that society holds so strongly that violating it results in extreme disgust or expulsion from the group or society. Often times the violator of the taboo is considered unfit to live in that society. For instance, in some Muslim cultures, eating pork is taboo because the pig is considered unclean. At the more extreme end, incest and cannibalism are taboos in most places.

A law is a norm that is formally inscribed at the state or federal level and is enforced by police or other government agents. Laws exist because the violation of the norms of behavior they govern would typically result in injury or harm to another person, or are considered violations of the property rights of others.