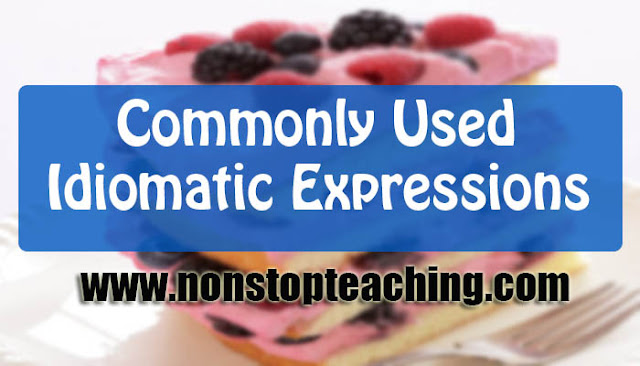 What is Idiomatic Expression (Idioms)?

An idiom is a phrase or an expression that has a figurative, or sometimes literal, meaning. Categorized as formulaic language, an idiom's figurative meaning is different from the literal meaning. There are thousands of idioms, occurring frequently in all languages. - Wikipedia

Commonly Used Idiomatic Expressions (Idioms)
1. ‘The best of both worlds’ – means you can enjoy two different opportunities at the same time.
“By working part-time and looking after her kids two days a week she managed to get the best of both worlds.”
2. ‘Speak of the devil’ – this means that the person you’re just talking about actually turns up at that moment.
“Hi Tom, speak of the devil, I was just telling Sara about your new car.”
3. ‘See eye to eye’ – this means agreeing with someone.
“They finally saw eye to eye on the business deal.”
4. ‘Once in a blue moon’ – an event that happens infrequently.
“I only go to the cinema once in a blue moon.”
5. ‘When pigs fly’ – something that will never happen.
“When pigs fly she’ll tidy up her room.”
6. ‘To cost an arm and a leg’– something is very expensive.
“Fuel these days costs an arm and a leg.”
7. ‘A piece of cake’– something is very easy.
“The English test was a piece of cake.”
8. ‘Let the cat out of the bag’ – to accidentally reveal a secret.
“I let the cat out of the bag about their wedding plans.”
9. ‘To feel under the weather’ – to not feel well.
“I’m really feeling under the weather today; I have a terrible cold.”
10. ‘To kill two birds with one stone’ – to solve two problems at once.
“By taking my dad on holiday, I killed two birds with one stone. I got to go away but also spend time with him.”
identify the skills you need to improve
11. ‘To cut corners’ – to do something badly or cheaply.
“They really cut corners when they built this bathroom; the shower is leaking.”
12. ‘To add insult to injury’ – to make a situation worse.
“To add insult to injury the car drove off without stopping after knocking me off my bike.”
13. ‘You can’t judge a book by its cover’ – to not judge someone or something based solely on appearance.
“I thought this no-brand bread would be horrible; turns out you can’t judge a book by its cover.”
14. ‘Break a leg’ – means ‘good luck’ (often said to actors before they go on stage).
“Break a leg Sam, I’m sure your performance will be great.”
15. ‘To hit the nail on the head’ – to describe exactly what is causing a situation or problem.
“He hit the nail on the head when he said this company needs more HR support.”