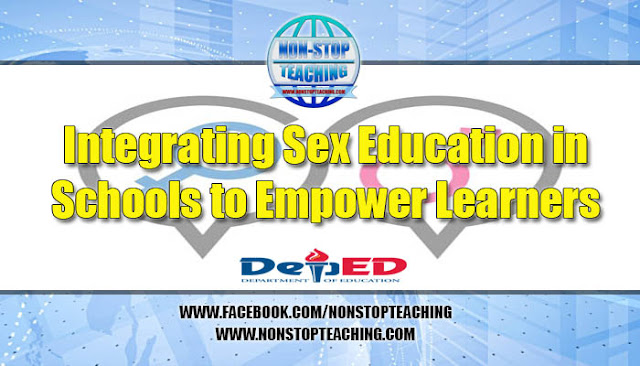 MANILA -- The Department of Education (DepEd) on Thursday underscored the importance of integrating sexuality education lessons in public elementary and high schools to curb the incidences of teenage pregnancy, population growth, and sexual diseases.

Education Undersecretary Annalyn Sevilla said the DepEd is working on the updates and improvement of policy guidelines on the implementation of the Comprehensive Sexuality Education (CSE) integrated with subjects and extra-curricular activities.

"We want it integrated with existing subjects, as well as in the different activities we do in school," Sevilla said in Filipino during a television interview over state-run PTV.

On July 13 last year, the DepEd issued the CSE policy guidelines that aim to ensure that learners receive comprehensive and appropriate information that can advance gender equality and empowerment.

Teachers, school principals, and other education stakeholders are expected to make teaching and learning more relevant, meaningful and useful to learners through the policy guidelines.

The topics would be integrated in such learning areas as Araling Panlipunan, Physical Education and Health, Science, and Personal Development.

"(For) example, in science. We know that the parts of the body is a science topic. But here, we will integrate the concept of privacy, harassment, and good relationship. So, values education comes in," Sevilla said.

Tacardon said the Philippines' fertility rate is much higher than the other two factors, hence, the country's increasing population.

"Around 2 million is added to us every year based on our current population growth rate at 1.7 and when you translate this to simple arithmetic, this is three children per minute so around 4,000 per day, are added to us," he said.

Lack of awareness about the right method of family planning among many Filipinos is another contributing factor to the issue, he added.

According to the Philippine Statistics Authority 2017 National Demographic and Health Survey, overall, 9 percent of women aged 15 years to 19 years have begun childbearing: 7 percent have had a live birth and 2 percent were pregnant.