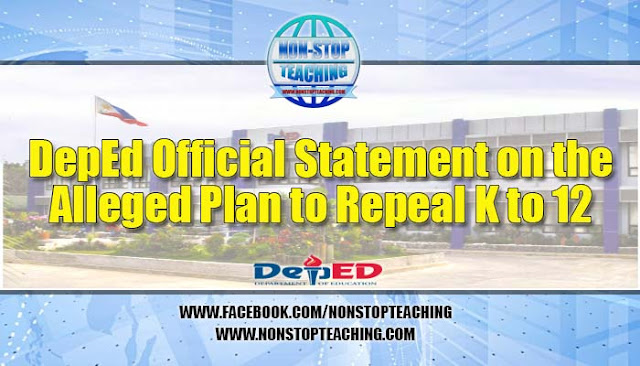 The Department of Education (DepEd) released its official statement on the alleged plan to repeal K to 12 program that is circulating online. Read the full statement below:

PASIG CITY, May 20, 2018 – Sentiments and questions on social media pertaining to the supposed plan to scrap the K to 12 Basic Education Program are clearly based on misinformation and lack of critical discernment.

The claims circulating online came after news of the Commission on Higher Education’s (CHEd) plan to “review and change” the system for its K to 12 Transition Program was misconstrued to mean the implementation of the entire K to 12 Program. These two are not one and the same.

The implementation of the K to 12 Program has seen numerous gains for the basic education system, which include the initial results of the Senior High School (SHS) Program surpassing expectations in enrollment and transition rates and in providing free or highly subsidized SHS education to more than 2.7 million learners in public and private schools two years after the SHS Program implementation.

It is also important to remind the public that the Department of Education’s (DepEd) implementation of the K to 12 Program is mandated by law, under Republic Act No. 10533, otherwise known as the “Enhanced Basic Education Act of 2013.” Therefore, DepEd, as an executive arm of the government, cannot arbitrarily discontinue the Program. As with any law, the implementation, amendment, expansion, or repeal of the K to 12 Program is within the ambit of the legislative branch of the government comprised of the Senate of the Philippines and the House of Representatives.
Nevertheless, the Department maintains its stand that the K to 12 Program is a prompt necessity that pushing it back might prove detrimental to the accelerating and increasing demands on education. The challenges still abound but the support of the national and local government, and of stakeholders in the private sector and the community, has been overwhelming that it silences doubts and strengthens the resolve to move forward with change today.
Lastly, DepEd calls on the public to make a habit of consulting the official website and social media accounts of the Department before spreading assertions and engaging discussions on its policies, programs, and projects that may influence the opinion, decision, or action of our primary stakeholders ─ our learners.
END