How to Find Your Precinct Number Online 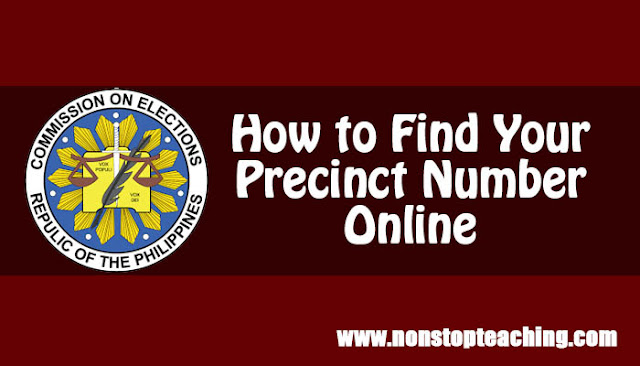 Good news! Commission on Elections' (Comelec) online precinct finder is now working. Registered voters may now check their precinct number for the upcoming election from the link below:
https://www.gov.ph/web/precinctfinder/

This online service attempts to find and display the assigned precinct and polling center (or foreign service post) of active Filipino voters (whether registered in the Philippines or overseas). This is to provide information on where the concerned voters need to go to vote on Election Day this coming 13 May 2019 National and Local Elections. The voter database that is used for this service is updated as of the last voter registration period in September 2018.


Voters whose records have been deactivated for failure to vote in two consecutive regular elections or other applicable reasons will not be able to vote this coming May 2019. They will have to wait for the next resumption of the voter registration period after the May 2019 elections to have their registration record reactivated.

This search facility is very straightforward and easy to use. It only requires that you type in your First Name, Middle Name, Last Name, Province, and City/Municipality of registration. All of these should be provided in order for the search to work.

People who do not have a middle name may use the dot or period (.) character.

Names with “Maria” or “Ma.”
If your name contains MA. or MARIA, try both variations in the FIRST NAME field, such as:

You may also try using just “Ma” without a dot or a period.

in the LAST NAME field after your last name, such as "DELA CRUZ JR."

without a period, such as "JR"

with a comma and period, such as "JUAN, JR."

or a combination of the above-mentioned variations.

To insert the “Ñ” character, simply click on the “Ñ” button provided at the side of each text field. You can also just use the Alt+165 combination keys.

It is also possible that the name was recorded as “N” simply instead of “Ñ”.


Voters registered in Metro Manila
Cities in Metro Manila are not under any PROVINCE. However, for purposes of database categorization, Metro Manila or the National Capital Region (NCR) has been divided into four so called districts and grouped the cities as follows:

Tried these TIPS but still cannot find your record

For further information, please feel free to contact your local COMELEC office or the Foreign Service Post that has jurisdiction over your country of registration.