Clarification for the Use of Calculators for LET 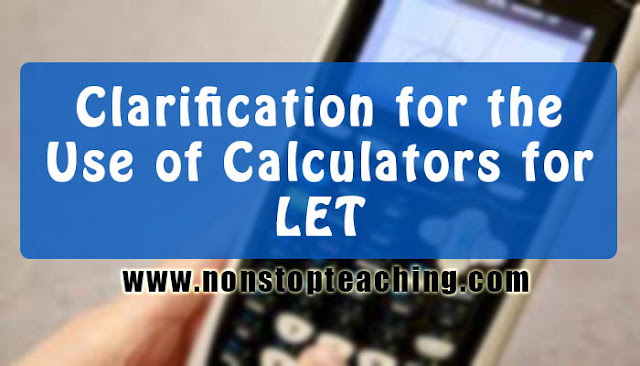 The Professional Regulation Commission (PRC) has confirmed the limitation for the use of calculators starting this September 2019 Licensure Examination for Teachers (LET).

As announced online by PRC, only Mathematics majors are allowed to use calculators during the examination, provided, that such calculators have the following features only: addition, subtraction, multiplication, division, trigonometric function, logarithm, and XY," PRC said.

"Examinees for the Secondary Level, with major in Mathematics, may use calculators during the LEPT, provided, that such calculators have the following features only: addition, subtraction, multiplication, division, trigonometric function, logarithm, and XY," PRC said.

NOTE:  Takers other than those mentioned above are prohibited from using calculators, regardless of model or unit.

This announcement is pursuant to Resolution No. 25, series of 2019 issued by the Board for Professional Teachers.


The inclusion of the Calculator was also included in the revision of the September 2019 LET program.

The official list of non-programmable calculators was also announced through PRC Memorandum Circular No. 2004-06. Last year, two models of calculators were also banned due to some programmable features.

This article originally appeared on The Summit Express